Due to construction, our local office is closed to the public. All activities are online until further notice. 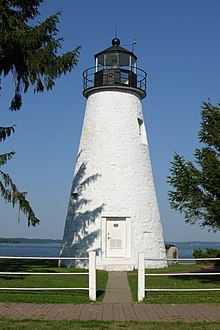 Join us for this free virtual event to learn the story of Havre de Grace’s Concord Point Lighthouse – its past and future – as told by Lighthouse Director, Carol Allen.

The Concord Point Lighthouse is the second oldest lighthouse in Maryland and a time-honored symbol of Havre de Grace. Built in 1827, the lighthouse served as a beacon for sailors in the Upper Chesapeake Bay until being decommissioned in 1975. Located at the point where the Susquehanna River meets the Chesapeake Bay, the light was an active aid to navigation for 148 years. Today, the fully restored Lighthouse and Keeper’s House are both open to the public on weekends from April to October. In addition, volunteer keepers conduct educational tours throughout the year.

The Lighthouse property anchors one end of Havre de Grace’s beautiful waterfront promenade on property located along where the Susquehanna River meets the tidal flow of the Chesapeake Bay. It is the northernmost lighthouse and the second-oldest tower lighthouse still standing on the bay.